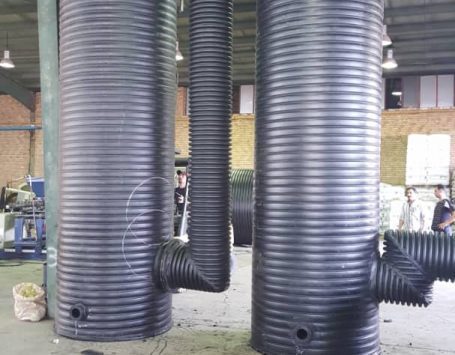 The sewage manhole is responsible for connecting the sewer lines, water, electricity, telephone, etc., without which these lines will be unusable. In this article, an attempt has been made to provide explanations about the types of manholes, carogite manholes and then its applications.

What is a Manhole?

Manholes or manholes are part of the underground networks of facilities that allow access from the ground or connect these lines to each other, and by removing this part, the underground networks practically lose their efficiency. Manholes allow inspection, cleaning and repair in these systems and therefore must have a suitable diameter so that people can enter them to meet the needs of the network.

The first manholes were made of brick, which are also called traditional manholes. Unfortunately, these types of manholes are still used due to their low initial cost, but over time, as their disadvantages became known compared to other types of manholes, they lost their effectiveness in the industry. Disadvantages of brick manhole include the following:
1- High vulnerability to natural disasters such as earthquakes
2- Low chemical resistance, especially against corrosive substances
3- Moisture leakage, especially in sewerage networks
4- Low speed in installation and commissioning
5- High roughness as floor duct
6- Not usable on large scales and large depths

With the advancement of technology and the emergence of problems with concrete and brick manholes, polyethylene (carogite) manholes became very popular. These manholes were in better condition than all the other manholes in all of the above cases, and in the long run they greatly reduced maintenance costs and also had a longer life. The advantages of this category of manholes are as follows:

This feature prevents various molds from settling in it, which is very efficient in sewer lines, and also increases the lifespan many times compared to concrete and brick manholes.

Polyethylene manholes are very light in weight and this feature makes them easier to transport and faster to install.

High resistance These manholes are much more resistant to shocks as well as earthquakes and other accidents.

Polyethylene manholes have a lifespan of more than fifty years and can be recycled even after they have expired.

In addition to longevity, one of the most important advantages of this category of manholes is cheap and easy maintenance, which makes them very popular.

Polyethylene manholes are very suitable for installation and operation, because due to their light weight, they are much easier and faster to install in place and do not require equipment for transporting and installing heavy loads. Therefore, their installation cost is lower than other manholes. Also, these manholes have much less waste, which reduces costs and makes connections between them easier and faster.

Polyethylene manholes have the ability to increase the length and connections after the project, which other manholes do not have this unique feature.

The time required to produce polyethylene manholes is much shorter than other prefabricated manholes, which reduces project execution time.

In addition to being recyclable, polyethylene manholes prevent the leakage of fluids, especially wastewater. These manholes also prevent the nesting of vermin and rodents and increase the life of these lines.

Polyethylene manholes have an extremely high sealing due to the material and method of construction, which eliminates the possibility of fluid leakage, both from the outside and inside, and no leakage occurs in the joints. This feature is very important in the wastewater and petrochemical industries.

Polyethylene manholes of Nashagster Pardis Company can be designed and manufactured as one of the oldest in different diameters and dimensions. These manholes are cut into desired shapes with advanced machines and are welded by extrusion welding according to DVS 2203 and DVS 2207 standards.

Polyethylene manholes in water and sewage networks assist in the accumulation and distribution of wastewater, the collection of taps and surface water, and drainage. The manhole is used for the catchment area, the sewage pumping station for flow control, the siphon chamber, the installation and inspection of valves, and the inspection and maintenance of the network. One of the benefits of carogite manholes is that it is resistant to hydrogen sulfide and prevents rot and corrosion. However, concrete and brick manholes in sewerage networks were damaged quickly and had a short life. Manhole helps a lot in ventilation, repair, draining fluids and plays an essential role in standardizing domestic sewage outlets.

One of the requirements of electricity and telecommunication networks is multi-network connection and cable connection, as well as switching capability, which is impossible without manhole. Carogit manholes, in addition to meeting the above requirements, have a very high advantage over other types of manholes in terms of moisture resistance and the ability to change the system. Because of the strong current or fiber optics in these networks, the manholes must prevent the leakage of fluids from the outside. Polyethylene manholes, due to their suitable material and extrusion welds at the joints, prevent leakage and greatly increase the security of power and telecommunication networks. . In addition to the above, carogite manholes are also very common in the marine industry.

Carogit manholes are divided into two categories, double-walled and single-walled, based on the construction method, and are used for electrical, telecommunication, sewage, marine and other underground installations.

Power grids or telecommunications require the connection of different cables from different paths, which is possible in manholes. Therefore, the manhole must be able to withstand shocks and natural disasters, and on the other hand, prevent the entry of liquids and vermin that destroy the cables. Polyethylene manholes are the best choice for this. On the other hand, for repairing and changing the cable network and WordPress and leaving the network, we need manholes. Polyethylene manholes, in addition to meeting these needs, are very popular due to their easy installation and low cost.

These manholes are produced from 600 mm to 18000 mm in diameter and according to the customer’s needs to the desired height.

The sewer network needs to be assembled, inspected and repaired, which is met by using a manhole. In addition, the sewer system must be resistant to natural disasters such as floods and earthquakes, severe shocks, corrosion by chemicals such as hydrogen sulfide, vermin and the like. Therefore, in addition to solving the above problems, Carogit manholes are the most suitable option for implementation due to the prevention of leakage of sewage taps.

One of the most important parts of any project is the installation of manholes in the pit, which is very easy due to the characteristics of polyethylene manholes. The installation steps are summarized and based on conventional standards below. Of course, it should be noted that due to the condition of the soil and the project, important details change, which must be decided by the project technical team.
1- Precise cutting of manholes: Manholes should be cut precisely according to the diameter of the pipes.
2- Digging a pit: Normally, the pit intended for the manhole should be 1/4 times the diameter of the manhole to be installed in the most optimal state of the manhole.
3- Flooring: Then, to strengthen the pit floor, we cover it with 10 cm thick concrete. This concrete can be prefabricated or prepared on site.
4- Installation of manhole: After concreting, we place the manhole in the concrete and carefully connect the pipes and install the steel stairs at the installation site.
5- Making a concrete slab: In this step, we make a concrete slab on the manhole so that the load is evenly distributed.
6- Filling materials: Depending on the condition of the soil and climate, we fill the area around the manhole with a suitable mortar (usually shaft and lime).

Nashagster Pardis Company has a quality control laboratory equipped with advanced laboratory equipment and by conducting detailed tests on its products based on domestic and foreign standards has been able to bring high quality products to market.

In this company, the tests are performed as follows:

Density According to ISIRI 7175-5, the physical properties of polyethylene can be predicted by density with a good approximation. For this purpose, in this company, this test is performed by floating method on raw materials and products.